JACOB JACOB in the Press 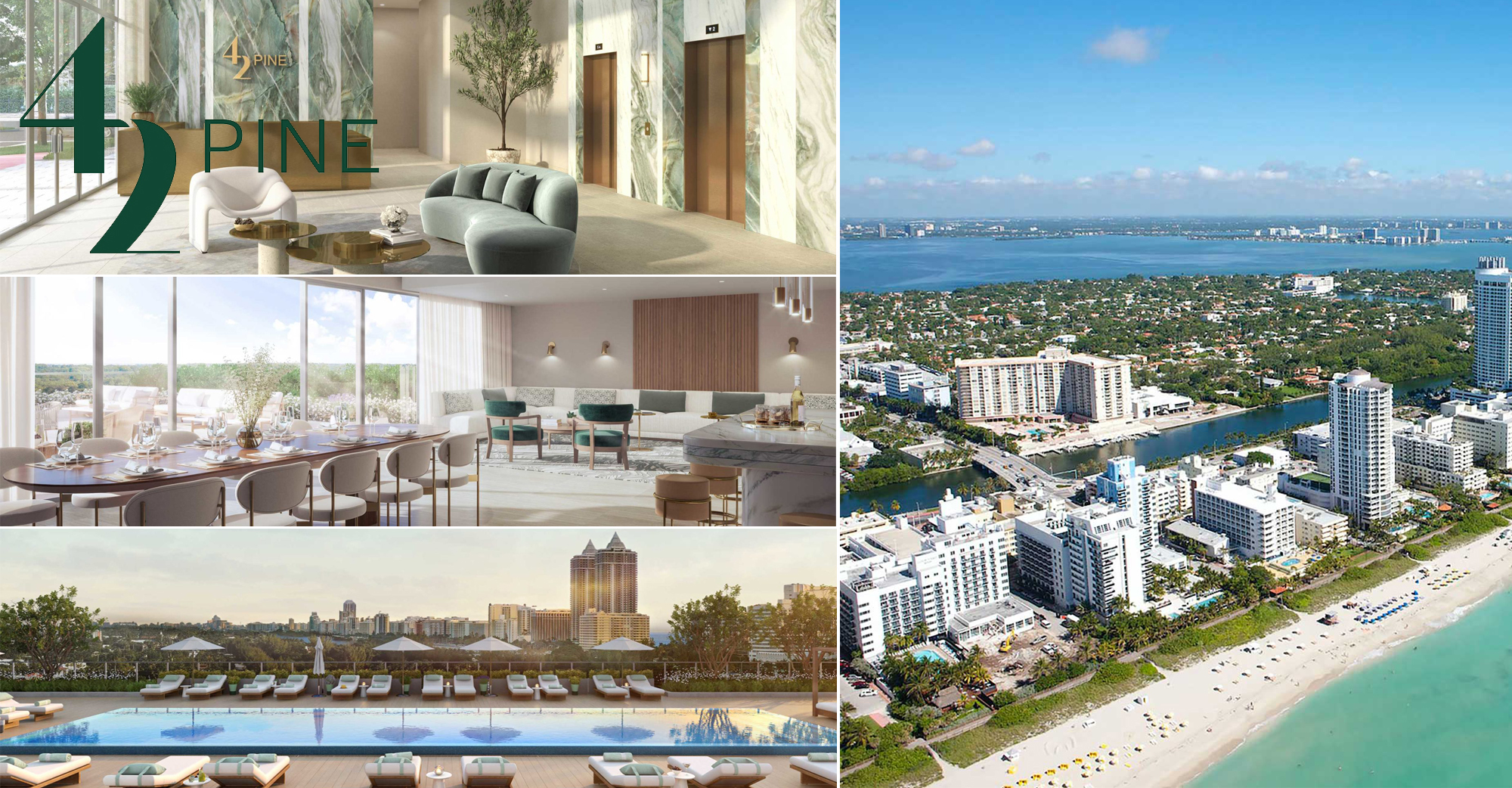 Located in one of Miami Beach’s most desirable residential neighborhoods, 42 Pine offers a limited collection of fifty well-appointed residences with exceptional services and amenities.

JACOB is the Construction Manager for this exciting development and has started construction in June 2022 building 50 Luxury Residences, with floor plans for one, two and three bedroom residences. All residences share exceptional amenities located within the building. Located a few short blocks from the Atlantic Ocean, 42 Pine is centrally located in one of Miami Beach’s most coveted and walkable residential neighborhoods.

42 Pine offers a full-array of amenities and services, including: 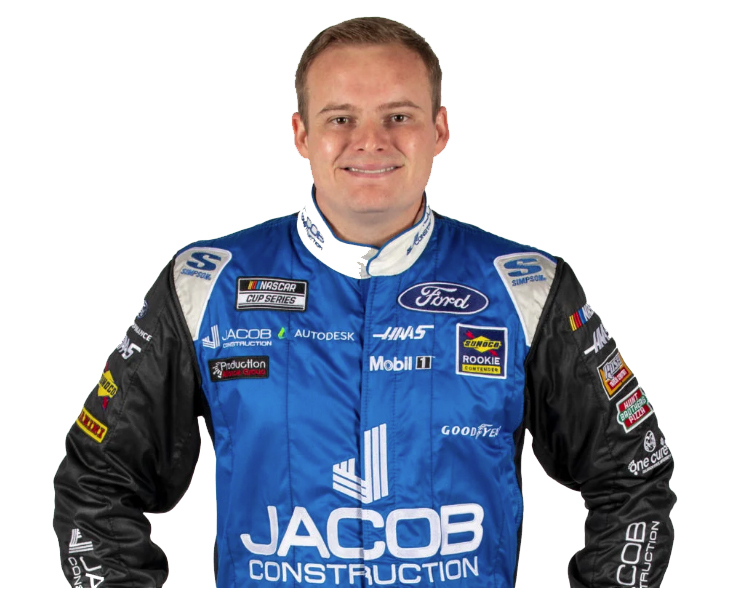 Cole Custer and the No. 41 Jacob Construction/HaasTooling.com Ford Mustang team head to Homestead-Miami Speedway for Sunday’s Homestead 400. Custer will make his first Cup Series start at the mile-and-a-half track and his 15th career Cup Series start.

The most recent Cup Series race was held Wednesday night at Martinsville (Va.) Speedway. Once again, the event was run without practice or qualifying due to the condensed schedule during the COVID-19 pandemic. Custer fought a tight-handling No. 41 Ford Mustang throughout the race, which made for a challenging night. After starting 27th, Custer finished the night 29th in the HaasTooling.com/Jacob Construction Ford Mustang.

Homestead has been a stellar track for Custer in the NASCAR Xfinity Series, in which he has four starts from 2016 through 2019. In his last three outings, he started and finished in the top-two. In November 2017, he captured the victory by a margin of 15.405 seconds. In November 2018, Custer won the pole position with a speed of 165.598 mph and finished runner-up in the Ford EcoBoost 300. In November 2019, he started and finished second. Overall at Homestead, Custer has an average Xfinity Series start of 5.8 and an average finish of 5.5, along with 292 laps led while completing 100 percent of the laps available.

In the NASCAR Gander RV & Outdoors Truck Series, the young driver has one appearance at the South Florida track. He started second and finished 10th in November 2016.

At mile-and-a-half tracks this season, Custer has finishes of 19th at Las Vegas Motor Speedway and Atlanta Motor Speedway, and 12th and 18th at Charlotte (N.C.) Motor Speedway. Homestead will be the fifth intermediate oval the series has run on this year.

One thing that makes this weekend even more unique is that a select group of fans will be able to attend. The track will host 1,000 military members, first responders and their household members in the first step to allowing fans back to a racing venue. Next weekend at Talladega (Ala.) Superspeedway, 5,000 fans will be allowed in the grandstands, along with select camping spots outside of the facility. All fans will be required to follow all health and safety protocols and procedures. 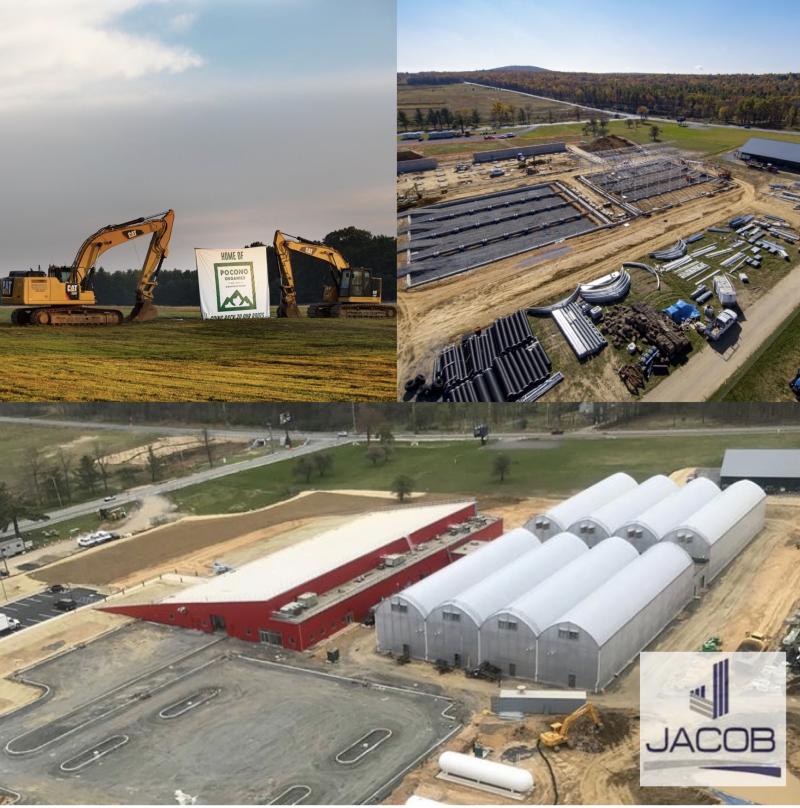 Sometimes the best way to create a brighter future is to go back to your roots. That’s the vision for Pocono Organics as its farmland, once a thriving spinach farm in the 1940s, is now poised to be one of the first and largest public-facing regenerative organic fruit and vegetable operations in North America.

The 50-acre organic farm is the vision of Ashley Walsh, a third-generation business leader in the Mattioli family who learned first-hand from her grandfather and Pocono Raceway founder, Dr. Joe Mattioli, that a big vision could create progress and progress could create change.

“What started out as a lifestyle and health choice for my family and I became a larger mission when I thought about how we could utilize our land to grow organic food to help others, create jobs in our community, and ultimately become an example of what a fully sustainable regenerative organic farm could be,” said Walsh, president of Pocono Organics.

Pocono Organics is designed to be self-sustainable in order to reduce its environmental footprint. JACOB, is constructing this new facility to LEED standards--the farm will draw its power from the 3MW 25-acre solar farm that also powers Pocono Raceway. Organic crops, such as fruits, grains, herbs, vegetables and flowers will grow in both outdoor fields and in nearly 40,000-square-feet of greenhouses. Water for these crops will be reclaimed rainwater that will be collected and filtered through a living, vegetative roof atop the “State-of-the-Art Barn,” a nearly 30,000-square-foot processing and storage building attached to the greenhouses. Pocono Organics will also install its own septic and well water systems.

“We are committed to Regenerative Organic Agriculture and are launching innovative programs to create a closed-loop growing system,” Walsh continued. “For example, our Farm-to-Track program will supply our organic crops to Pocono Raceway for events and in turn, the track will supply us with compostable waste for our regenerative soil program needs. We couldn’t do this without partners like Rodale Institute. They bring us decades of experience and leadership that will accelerate our ability to serve our communities and help us become an incubator for organic research as well as a destination for agritourism.” 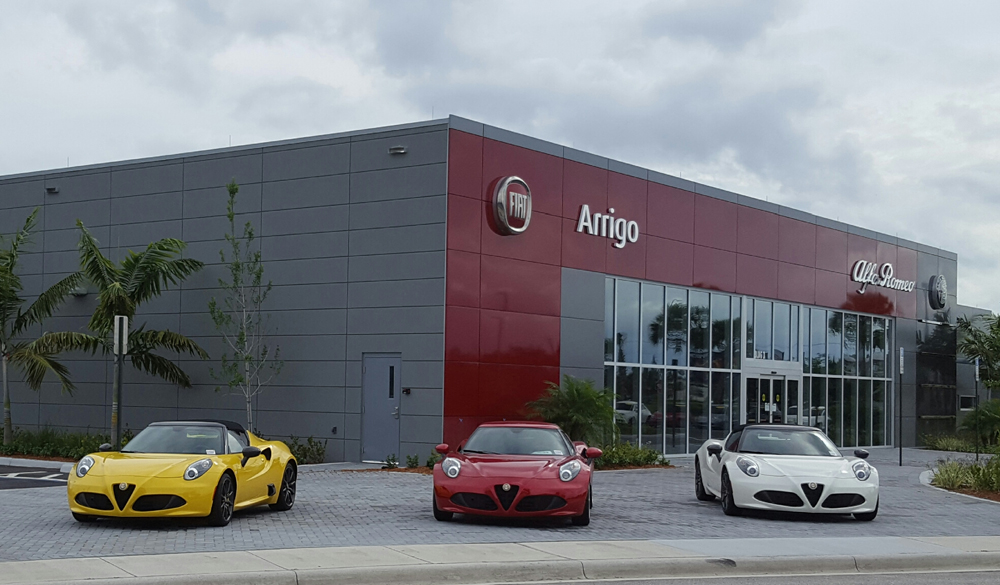 Arrigo Alfa Romeo-Fiat in Palm Beach. This 25,000 soft is the first stand-alone Alfa Romeo Dealership in the U.S. 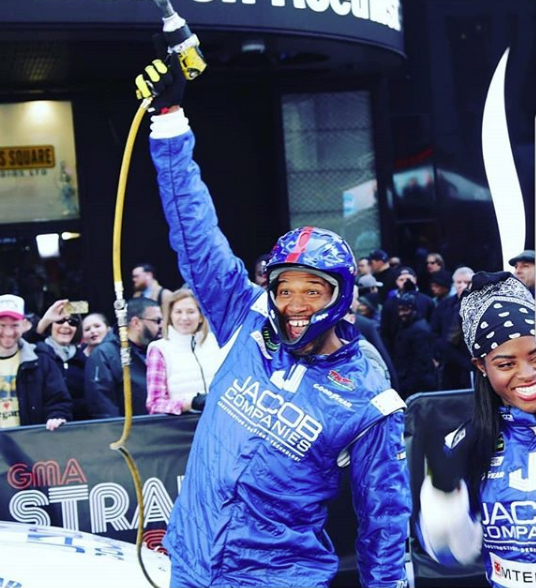 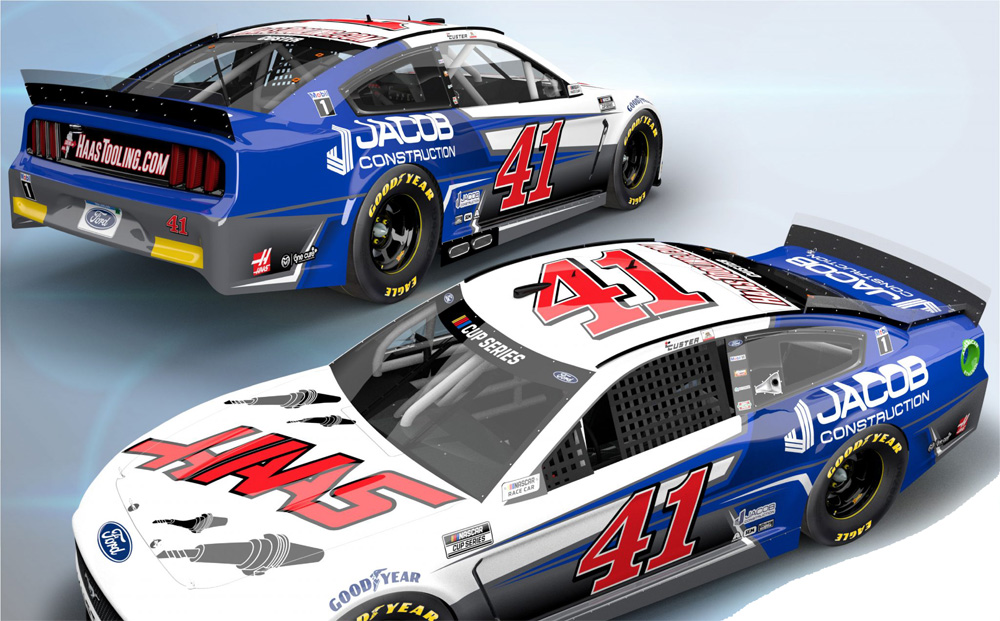 The deals will be announced this week. NetJets will take the title of official private aviation partner of NASCAR, while Jacob becomes the official construction company. The deals mark the first time NASCAR has had a partner in either category. Financial terms are not being released, but both deals are for multiple years and involve rights fees, according to Chad Seigler, vice president of business development for NASCAR.

Seigler said his team has been challenged to bring in sponsors across emerging or less traditional categories. Given that both companies are in NASCAR mainly to find B2B connections, NASCAR’s pitch involved how fertile the sport is with private aviation customers and companies that may need construction work on their facilities.

Both partners get rights to NASCAR intellectual property and marks, hospitality at a number of races, and entry to NASCAR’s Fuel for Business Council, which fosters B2B relationships among NASCAR partners by holding quarterly symposiums.

“For us, when we were sort of looking at this category in general, you looked around at a lot of the other sports leagues and saw places like the PGA where this category was having some success,” Seigler said of private aviation. “When you take a look at what happens in our industry on a weekly basis, whether it’s drivers, owners, crews, there’s so much private aviation that it just made sense to tell that story.”

NetJets, which also has a spate of deals in golf and tennis, has had a number of customers in NASCAR for years, according to Patrick Gallagher, executive vice president of sales and marketing for the company. That includes the sanctioning body, Seigler said. Competitors include Wheels Up, which also has been growing its presence in NASCAR and has a personal service agreement with Team Penske driver Joey Logano.

Allegiant Air remains the official airline of the sanctioning body, in a deal struck last year.

Meanwhile, Don Perry, chief executive of Jacob Companies, said the NASCAR sponsorship makes sense because his company is already seeing 50 percent of its projects come from the NASCAR space. The Florida-based company, which does work nationwide, has been involved in the sport for a few years as a team sponsor and has handled projects such as building the Chevrolet Daytona Experience in the infield of Daytona International Speedway. The company has sponsored Chip Ganassi Racing, and Perry said B2B results from that partnership include expanding the IndyCar shop for Ganassi in Indianapolis and work with Ganassi sponsor Target.

“Why I ventured into the partnership with NASCAR is, aligning with one or two teams, there’s only certain vendors you can partner with,” Perry said. “This gives us an opportunity to touch all of the partners in the sport.”

Jacob Companies CEO Don Perry will be named a Five Star General once again, continuing his sponsorship of The Generals Club, benefitting the Boys & Girls Club of Broward County. The Generals Club is a critical program within the Boys & Girls Clubs organization, as it introduces the construction industry to club members, providing another insight into worthwhile career options.

The Generals Club primarily consists of construction professionals who support the Boys & Girls Clubs financially and by developing critical programs that support and engage young people to enter the construction industry.

"Each year, I look forward to working with my professional peers in showing today's youth the value and opportunities available in the construction industry," explains Jacob Companies CEO Don Perry. "As a Five Star General, I find this donation of funding and time a rewarding endeavor for both myself and the club members."

Perry continues, "Being able to introduce myself, Jacob Companies and the projects we've completed to an audience who may one day be my partners in construction and development is both humbling and exciting, and I look forward to a long-lasting relationship with Boys & Girls Club, the Generals Club and its members."

Jacob Companies' Don Perry stands beside other local construction and development leaders from organizations such as Coastal Construction, Florida Panthers, Moss & Associates and The Altman Companies, among many others.

Jacob Companies is proud to announce its CEO Don Perry will serve on Operation Lift Hope's Board of Directors, joining an elite group of corporate and philanthropic leaders to make a deep commitment to ending the homeless situation for veterans and families with small children in Fort Lauderdale. Mr. Don Perry will serve on the organization's oversight committee, ensuring donor funds are spent properly to achieve the 2016 goal of ending homelessness for veteran heroes.

Operation Lift Hope, based in Fort Lauderdale, is a dynamic effort amongst local businesses, government and social agencies, to transform the face of homelessness in South Florida. Its community partners include Sun Sentinel Media Group, The Salvation Army, Port Everglades, the City of Fort Lauderdale, BB& T and Jacobs Companies, among many others.

"Jacob Companies is proud to be among a group of businesses and organizations with the likeminded goal of helping our communities be the best they can be," explains Perry.

Jacob Companies is proud to be a Gold Sponsor for the 2016 Alzheimer’s Association Brain Ball. The annual celebration and fundraiser will take place Friday, May 6 at the Andrew W. Mellon Auditorium in Washington, D.C.

“It’s an honor to support the Alzheimer’s Association Brain Ball through our sponsorship,” states Jacob Companies CEO Don Perry. “Alzheimer’s is a disease that currently cannot be prevented, cured or even slowed.  It is projected that by 2050, over 13 million Americans will be affected by this disease.”  The Alzheimer’s Association’s mission is to eliminate Alzheimer’s through the advancement of research, promoting brain health and supporting education in communities throughout the U.S.

As a sponsor of the Brain Ball, Jacob Companies stands beside other like-minded organizations such as Bank of America Merrill Lynch, Benchmark Senior Living and Cascade Living Group, among others.

“Jacob Companies is proud to be among a group of businesses and organizations with the like-minded goal of preventing and finding cures for Alzheimer’s Disease.”

Subcribe to our Media